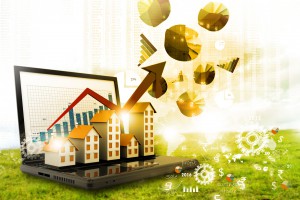 A rebound in the pace of capital gains across the Australian housing market throughout February saw the national index rise by 1.1% over the month, with the strongest capital gains continuing to emanate from Sydney (+1.7%) and Melbourne (+1.2%), while the remaining capital cities recorded a more modest rise, with Darwin the exception where home values were down 1.4% over the month.

On an annual basis, both Sydney and Melbourne moved back into double-digit annual growth rates, with values up 10.9% and 10.7% respectively over the twelve months ending February.

The latest results continue the recovery trend that has been running since June last year, following a peak-to-trough decline of 8.4% in the national index, with larger falls in Sydney (-14.9%) and Melbourne (-11.1%). 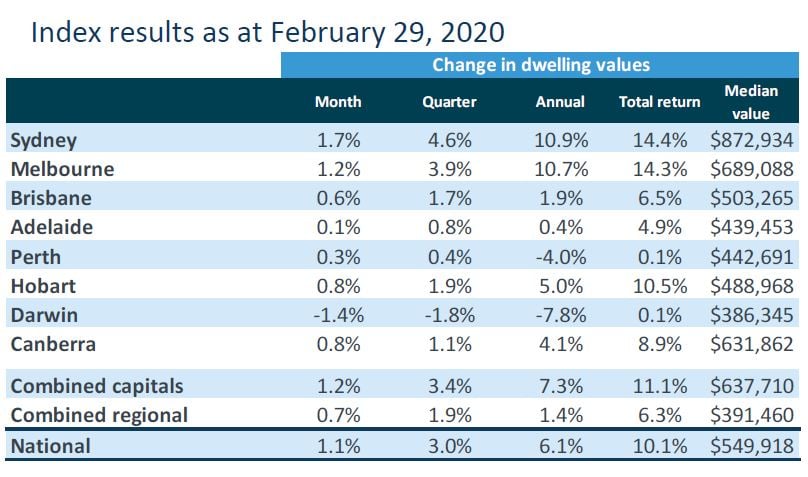 While there is large variability in capital growth from region to region and across the product types, every capital city excluding Darwin is showing an upwards trajectory, demonstrating a geographic broadening in the recovery as low mortgage rates and better access to housing credit fuel buyer demand.

Since finding a trough last year, the national index finished February only 1.2% below its 2017 peak.

At the current run rate of growth, the national index is likely to reach a new nominal high over the next two months.

Melbourne was the most recent city to stage a nominal recovery with housing values surpassing the September 2017 peak last month.

Melbourne has joined with Brisbane, Canberra, Hobart and Adelaide where housing values are also tracking at record highs. 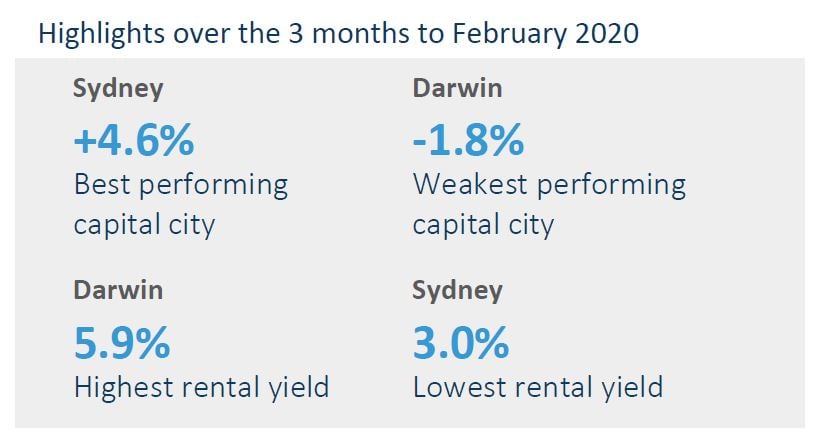 Further evidence that the long-running downturn is over for the Perth housing market was revealed, with dwelling values increasing by 0.3% in February, marking four consecutive months where dwelling values have avoided a fall; a trend not seen since the market peaked in mid-2014.

Although Perth values are now trending higher, the recovery period is likely to be a long one, with Perth housing values remaining 21.0% below their peak.

Regional markets are generally lagging behind the capital cities, with housing values only 1.4% higher over the past twelve months compared with a 7.3% rise across the combined capital city markets.

The diversity across regional Australia is extreme, with drought affected areas impacting the regional index. Meanwhile, the regional centres adjacent to the largest capitals, as well as coastal lifestyle markets, show a stronger performance. The trend towards a stronger performance across premium markets is most evident in Sydney and Melbourne, and to a lesser extent, Brisbane.

Sydney’s top quartile market has recorded a 13.3% lift in dwelling values over the past twelve months compared with a 5.6% rise across the lower quartile. 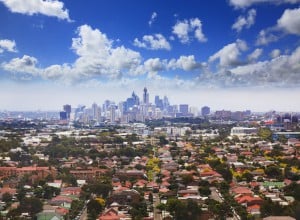 Similarly, Melbourne’s top quartile is up 14.2% in value over the past year compared with a 7.6% rise in lower quartile values.

The stronger performance across the more expensive end of the market comes after a larger correction during the downturn.

However, structural factors may also be at play, including a rise in borrowing capacity following changes to serviceability assessment from APRA in July 2019, and the dominance of owner occupier buyers (rather than investors) through the recovery phase to date.

With lenders favouring ‘high quality’ borrowers, buyers with a large deposit and low level of debt relative to their incomes, are likely to be those who receive the lowest mortgage rates – another factor that could be supporting demand at the more expensive end of the market. 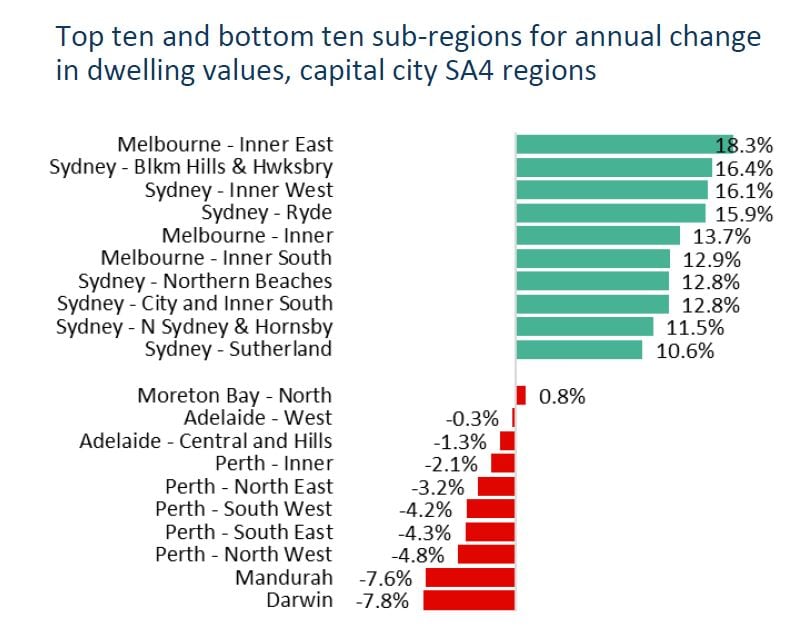 Only nine of the forty six capital city sub-regions recorded a decline in housing values over the past twelve months, with these areas confined to Darwin and regions of Perth and Adelaide.

On a rolling quarterly basis, only four of the capital city sub-regions have recorded a fall in housing values, with the Inner region and South West region of Perth moving back into positive quarterly growth as the market moves out of a long down-phase.

The top ten best performing capital city sub-regions are all located in Sydney and Melbourne, with each of these areas showing double-digit growth in home values over the past twelve months.

Many of these regions recorded the largest correction through the downturn and are now showing an extremely rapid recovery. Across the non-capital city sub-regions, thirteen of the forty two areas have recorded a fall in housing values over the past twelve months. 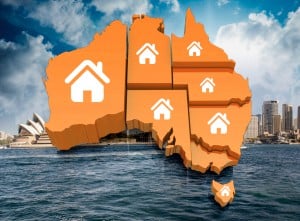 The weakest conditions were typically in the rural agricultural areas where the drought has had an adverse effect on economic conditions and local housing demand.

Outback Queensland, which covers most of the western portion of the state, has seen values drop by almost 21% over the year.

Regional Tasmania is now home to three of the top four regional areas with the highest capital gains with areas of Victoria rounding out the top five.

The strongest value gains continue to be recorded across properties in the upper quartile value range.

Across the combined capitals, the value of properties in the upper quartile rose by 1.6% in February compared with a 0.4% lift in value across the lower quartile. 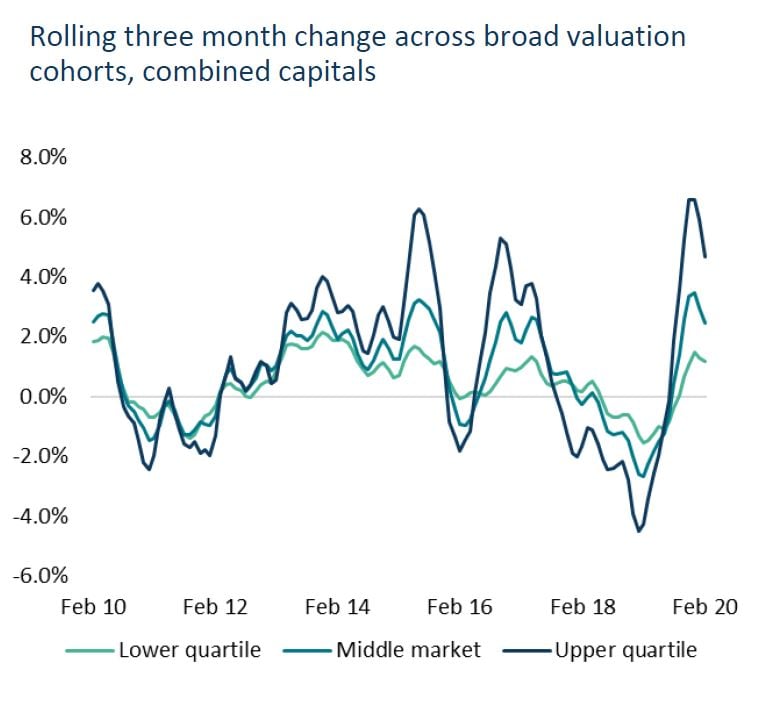 Nationally, rents were up four tenths of a percent in February, taking the annual change in rental rates to 1.4%. 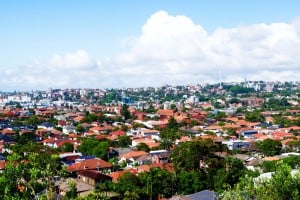 Rental growth generally remains weak across most markets, however the recent
trend has been towards a subtle rise in rental appreciation.

Twelve months ago, the national rental index was rising at an annual rate of just 0.4%.

The improvement in rental rates can be attributed to tightening rental supply.

Housing finance data shows investor participation in the housing market is near record lows and new supply additions are tapering. Across the combined capital cities the gross yield was tracking at 3.48% in February; the lowest yield reading since February 2018.

The current gross rental yield is also only nine basis points away from record lows.

Gross rental yields in Sydney are tracking to new record lows each month, falling to just 2.99% in February. 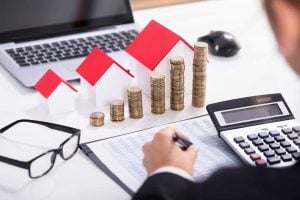 This is occurring as housing values surge higher against a backdrop of falling rents.

Despite overall weak housing market conditions, Darwin gross rental yields are the highest of any capital city at 5.9%.

However, this is a reflection of housing values falling faster than rental rates, rather than growth in rental values.

The strongest yield dynamic is in Hobart where overall tight housing conditions have pushed gross rental yields to 5.0%, providing a total return (gross yield plus annual capital gain) of 10.5%.

Although gross rental yields are trending lower, so too are mortgage rates.

At the end of January, the average three-year fixed rate for an investor mortgage was 3.48%.

This is only marginally lower than capital city gross rental yields, implying investors will be finding it hard to locate a cash flow positive investment property in low yielding markets like Sydney and Melbourne. 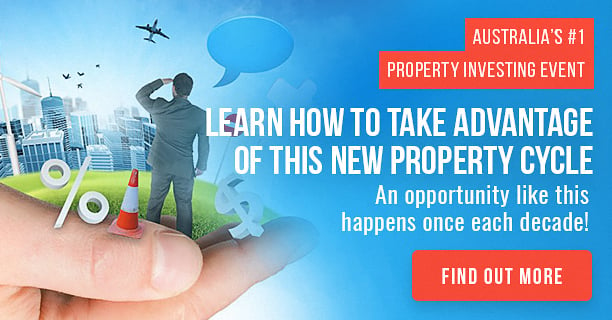 State by State Update on the Australian Property Markets –

3 reasons you may overpay for your next property –